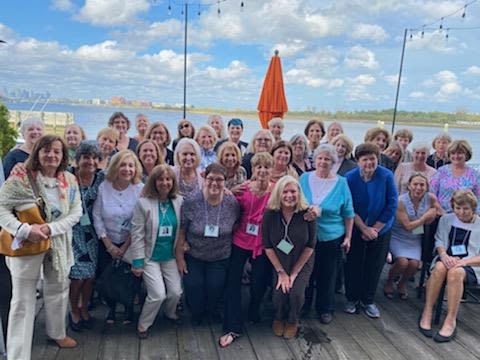 On Saturday, October 16, 2021, thirty-eight members of the Mount St. Joseph Academy, class of 1971 gathered at the Venezia Waterfront Restaurant in Boston to celebrate 50 years since our graduation from the Mount on June 1, 1971. Classmates from Alabama, California, Maine, New York, New Jersey, North Carolina; and Francaville al Mare, Italy joined classmates who had driven north from Cape Cod, and from towns north, south and west of Boston. The energy and excitement of this long awaited event grew as each classmate entered our private function room amid laughs, tears, and hugs! The long hours that Committee member, Marilyn Raffoul O'Leary spent tracking down addresses and phone numbers were well worth it!

Class President and Committee member, Ann Cruickshank Kaveney officially welcomed everyone present. She introduced Committee member, Joan Collins Silvio who wrote the opening prayer. Joan expressed gratitude for our classmates, as well as for the Sisters of St. Joseph who contributed significantly to our Mount experience. She then offered a blessing for our meal and our time together.

Committee member and MSJA Woman of Excellence, Maureen McCarthy, followed with a toast "to the memory of the girls we once were; to the reality of the women we have become; to the forbearance of the women who educated us; and, to the wonder of the force that unites us – The Mount."

Conversations unfolded amid a delicious meal of chicken piccata, baked haddock, Yukon potatoes, vegetables and salad. Committee member and treasurer Dotty McCarthy Gill arranged for a special chocolate and vanilla cake, topped with the Mount emblem. As we enjoyed coffee, tea and dessert, classmates took advantage of the opportunity to introduce themselves to the group, or to share a memory of their days at the Mount.

As the afternoon moved along, MSJA'71 classmates gathered on the dock adjacent to our function room for pictures on what proved to be an unusually warm October afternoon!

Committee member, Ellen Gunning compiled a booklet that included pictures from prior reunions and warm messages of regret from classmates who were unable to attend the reunion. John Kuklinski, husband of Susan Annino Kuklinski, and a professional videographer produced a video of memories of our senior year, of prior reunions and luncheons, and, a remembrance of those who have passed into eternal life. The video ends with the 1971 Glee Club recording of the "Mount Song!"

How true the lyrics! "Down all my days, your light will shine! O Mount, Mount of mine!"

Graduates of other Mount classes who are interested in working with their classmates to organize a reunion should contact, Julie Lima at julie.lima@saintjosephprep.org in the St. Joseph Prep Advancement Office.